Its a challenge for a fellowship in the 21st Century to worship in a 19th Century building. The Victorian building along with 1970's extension has been constantly developing so we can keep our church in our building relevant and useful for our needs. So what have we been doing over the last few years to keep up with modern day life ?

We have had this system in for a number of years and it has had many upgrades over that time. This enables us to show songs/hymns and readings on the screen. There is the ability to show videos and also presentations. This is run from a laptop running Songpro program on the sound desk. 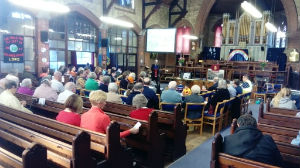 A new system was installed in 2017 giving us a massive capability boost to what we had before. With a new sound desk, loop system, amplifiers, speakers along with the radio microphones this gave us the equipment to have more scope for normal and also special services. Also a hymnal player was bought for when we have no music group. This plays a range of songs and hymns in various styles.

Our 1970's toilets were in need of a complete revamp and bringing up to standard. So in 2018 the men's and ladies toilets were replaced with four separate unisex toilets.

The main church had  fluorescent tubes hanging from the ceiling. These lights were outdated and seemed to give an affect of a lower ceiling. So the lights were replaced with large led panel lights in the ceiling and have opened up the church and are so much more brighter. 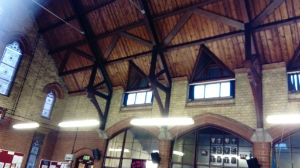 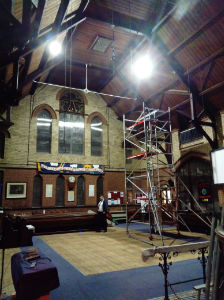 The church has decided that it needed more flexibility in the church building and so half of the pews have been replaced with seats. The present blue seats are temporary until we buy new seats. This has already helped when we have services that we need the seats moved and also for wheelchair users so we can remove seats so they can sit where they want to rather than in the aisles. 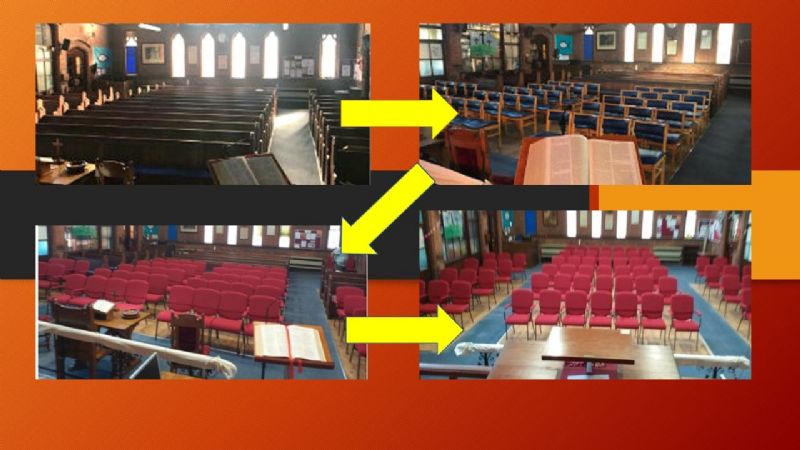 From Pews, to our temporary blue seat to no seats, then our new seats.

This has always been known as the Choir vestry from when there was a choir many decades ago. The room was initially a spare room and then a few children's toys and furniture was acquired from different places. It was felt that our young people deserved their own area that they could spend their time during the services and at other times. So the room was completely redecorated and all new furniture bought and now is a young persons friendly area with tables, chairs, sofa, bean bags, floor rugs and so much more. A screen is in the room so those can see what is being projected onto the large screen in the main church area. There are various activities available for the young people including computer tablets with apps suitable for young people in church. 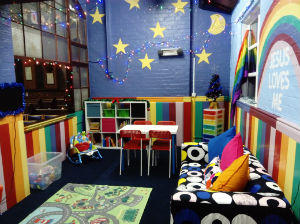 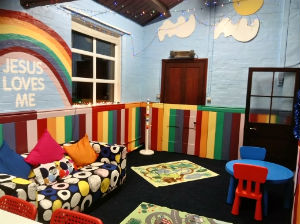